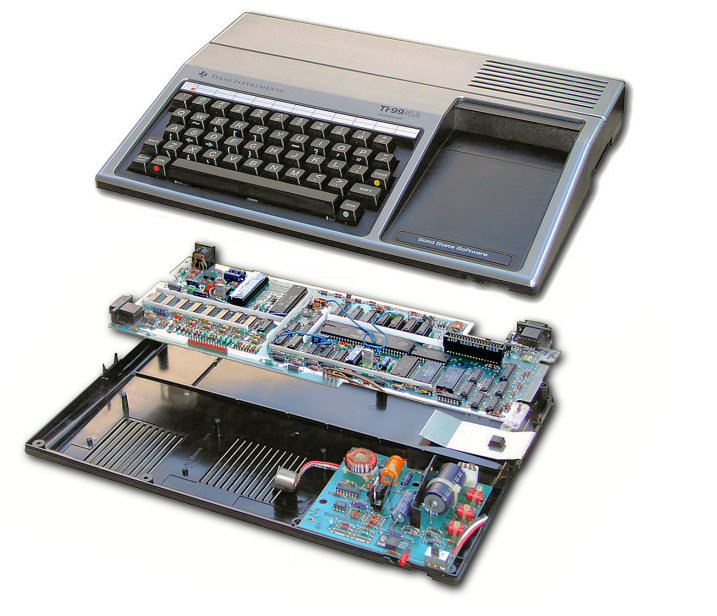 This shows how to disassemble the console for maintenance or for other modifications. The only tools you really need is a Philips screwdriver and some heat sink compound.

Please make sure that all wiring and soldering is double checked before re-applying power. Though computer components are pretty hardy some do not take to being wired up backwards or incorrectly. I have done my best to make sure that all diagrams and instructions given here are correct, but I can not be responsible for any damage an incorrect upgrade might cause. Also keep in mind that this will probably void any warranty :>).

To get started disassembling the console you will need to remove the switch extension.

Just pull the switch extension straight out as shown by the arrow in the above picture. It simply snaps in and out.

The next step is to remove the 7 screws which holds the consoles two halves together. The best practice is to lay the console on a towel so you do not scratch or dent the soft aluminum covers, or scratch the plastic on the newer beige models.

Now you are ready to remove both of these components. They should just pull right out of the case. Be careful handling both pieces at this point as you don’t want to break a wire on the keyboard connector.

This pictures shows the 3 main components of the TI-99/4A. In this picture I have unplugged the keyboard from the motherboard.

We are now ready to remove the shielding from the motherboard. The first step is to remove the cartridge extender, it just pulls out. Next remove the two clips which also just pull out.

On the end of the motherboard you will notice a copper shield which fits around the expansion end of the motherboard. Some motherboards use 4 screws while some only use 2. This one happens to use 2 screws. Remove all the screws holding the shielding. Be careful with these screws, particulary when re-assembling as you can easily strip them, and they are very small.

To finish the removal of the shielding you will need to remove 3 bolts. They are shown by the arrows in the above picture. They do have small lockwashers, so be sure to keep an eye out for them when you remove the nuts. BE SURE to notice the direction the bolts are inserted, as on some motherboards if you put them in “upside down” the case will hit them, and not go all the way together.

This picture shows the motherboard in all it’s 16 bit glory! The arrows show the heat sink and video chip. You will probably notice that the heat sink material has dried up. I suggest cleaning the old off and applying new heat sink compound before re-installing the shielding.

To re-assemble the console, you just need to reverse the steps above with a few things to keep in mind.

Another is to make sure that you have all the wires routed correctly. They pretty much will only go one way but you don’t want to pinch any of the wires. You can use the above pictures to see how they go.

Remember to put the cartridge extender back in, I have put several of the consoles back together only to find this part sitting on the bench. Makes it tough to use any cartridges :>).

The last thing to do is to put the sliding cover back in on the expansion slot in the case. Though leaving this out will not cause any issues, any good TI’r would be embarrassed not to have this installed. The picture above shows this part. You can usually find this part laying on the floor somewhere.